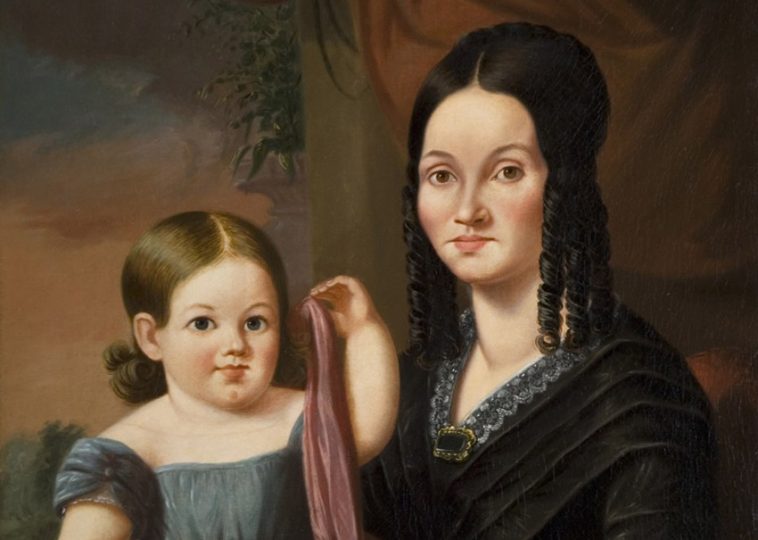 The descendants knew the portrait was painted in Boonville, Missouri, and they knew the sitters’ birth dates. The mother, Margaret Baird (Mrs. David Andrews), was born in Pittsburgh, Pennsylvania in 1817. Her daughter Florie, seated on her lap, was born in Boonville in 1846. The owners believed the portrait was painted ca. 1849 when Florie was about three and Margaret, 32.  I concurred. Margaret’s ringlets, the v-shape of her dress, the v-collar held with a brooch all fit the late 1840s. Below you can compare the portrait’s similarities with an 1849 fashion plate and with portrait by George Caleb Bingham known to have been painted in 1849, Eliza Rollins (Mrs. James H. Bennett) (1814-1849).

Can you also see in the portrait of Eliza Bennett how much more elegant is the artistic technique? With light and shadow Bingham tenderly modeled the face of the oldest sister of his best friend, James Rollins. The Bennett portrait is the work of a mature artist. The Andrews portrait, with its direct lighting is more primitive, yet its honest folk-art quality makes it an exquisite painting – not unlike the work of Bingham when he first began his artistic career. But by 1849, George Caleb Bingham had worked hard to improve his technique. He succeeded. His work had matured. Also, in 1849, Bingham, a recent widower, served in the legislature in the state’s capitol, Jefferson City, and traveled frequently to Columbia to court Eliza Thomas, who, when the mourning period ended, would become his second wife and mother to his children. George Caleb Bingham did not portray Margaret and Florie Andrews.

Then who did? In authenticating an artist, it is necessary to be knowledgeable of the work of his students and colleagues. In 1849, one of George Caleb Bingham’s students, William Morrison Hughes (1818-1892), lived on the family farm in Fayette, Missouri, 14 miles from Boonville. Morrison’s uncle had arranged his studies with George Caleb Bingham in the mid-1840s. According to family tradition, Morrison Hughes is the model for the central character in Bingham’s first most successful genre work, Jolly Flatboatmen in Port, 1846 (National Gallery of Art, Washington, DC). The war with Mexico that began in 1846 interrupted Hughes’ training. He enlisted with Doniphan’s Expedition. After defeating Native Americans and Mexicans and expanding the United States boundaries to the Rio Grande and the Pacific Ocean, he and his fellow soldiers returned to a heroes’ welcome in the summer of 1847. Hughes again studied with Bingham, traveling and working with him in the Boon’s Lick, Saint Louis, and New York, until he left for California in 1850. [1]

In 1849, Hughes was in the Boonslick busily painting portraits to fund his journey to the gold fields. He could mimic Bingham well, but his style was at least ten years behind his teacher’s. In the comparisons below of Hughes’s portraits with the portrait of Margaret and Florie Andrews, can you see the hand of Hughes? In the eyes? Mouths? In my opinion, Morrison Hughes portrayed Margaret and Florie Andrews. The Andrews portrait, also in my opinion, is the finest known painting by William Morrison Hughes. [2]

Stories Behind the Portrait

Margaret Baird was born 17 January 1817 in Pittsburgh, Pennsylvania.  She married David Andrews 7 November 1833.  She was 16; he, 23. Andrews had come to Missouri with his parents in 1820, where he learned the trade of tinsmith, or tinner, as it was then called. He opened a store in Franklin, Missouri, but after the Missouri river swept Franklin away, he opened a tin shop in Boonville in 1833, the same year that he brought his bride to Boonville.

Boonville incorporated in 1839. In its first election, the voters elected David Andrews a city councilman. In 1847, they elected him mayor.

Margaret gave birth to 11 children, but only 5 lived to be adults. Their oldest child was Hardage Lane, born in 1838, then David, Jr., born in 1844; Florence (Florie), 1846; Charles Edward, 1849; and Alonzo Prottsman Andrews, in 1854. In her portrait, Margaret wore mourning black. She had probably lost a child not long before she sat for Hughes. [3]

Andrews supported the southern cause during the Civil War. He was awarded a contract to supply canteens to the Confederate Army. During the Battle of Boonville on June 17, 1861, the elected governor of Missouri, Claiborne Fox Jackson, planned to bring Missouri into the Confederacy. But troops led by Union General Nathaniel Lyon defeated the rebel army. Jackson’s defeat put the federal government in control of Missouri. During the battle the rebel soldiers drank from canteens made by David Andrews. [5]

Not long after the fight, Union soldiers accosted Andrews, 53, on a road, beat him, and left him for dead. Margaret found her husband and nursed him back to health. But federal troops arrested him and took him to the state’s capitol, Jefferson City, fifty miles southeast of Boonville. There, General Lyons ordered him shot as a traitor. Margaret rode the 50 miles and pled with Lyons to spare her husband’s life.  “So determined and energetic was she that she succeeded in getting him freed.” [6]

David continued working as a tinner with the help of sons David, Jr. and Charles. The family lived comfortably. David died April 30, 1893. He was 83. He was remembered first as the father-in-law of Hon. Jno. T. Heard and secondly at the longest living continuous resident of Cooper County.

Margaret outlived her husband and all but one of her children. She died in March 1901, also at the age of 83. She is buried in Boonville’s Walnut Grove Cemetery next to her husband.

Florence Andrews was the only girl of the eleven children of David and Margaret Andrews, Sr. Born September 7, 1846 in the Andrews mansion at 519 Main Street.  She married there at the age of 20 on December 22, 1866. The groom was John Thaddeus Heard of Sedalia, Missouri.

Within a year, Florie gave birth to a son, Charles Stephens Heard, but he died in 1868. The Heards had no more children.

John T. Heard, a Democrat, served in the Missouri state legislature , from 1872-1874. From 1880-1884, he served as a state senator. In 1885, he was elected a United States Congressman. Florie, “a handsome lady…affable in manner,” was acknowledged as a factor in her husband’s success. But shortly after the 1886 convention, Florie was stricken with typhoid. The disease caused a cerebral hemorrhage. After nearly a month in a coma, she died on September 4, 1886. [7]

After her death Florie was remembered as “a very intelligent and estimable lady” who, as a child was “a pretty, peach-blossomed girl…with ringlets of black hair that were the admiration and love of every boy.” She always achieved “the best marks” in her school classes…As a wife, “she was an attached and devoted companion to her husband. [8]

Morrison Hughes preserved the likenesses of Margaret and Florie Andrews in a manner different from George Caleb Bingham. Should an effort be made to distinguish the work of teacher from student, for the integrity of both their legacies? What do you think of the Andrews portrait?

[1] William Morrison enlisted with his brother Ferdinand, who died in Santa Fe. Their mother Ann wanted her boy’s body in the family cemetery. She and a slave traveled to Santa Fe and back. The journey took a year and a half. They returned with the body, which is still buried in the family cemetery on the Hughes farm.

[2] Paintings by Hughes are often mis-attributed as Binghams, even into the present. For the most recent mis-attribution, in my opinion, I privately wrote the authenticator with documentation of my concerns in May 2017. Neither he nor another who has taken over his authentications have addressed my concerns.

Patricia Moss is an art historian, or art detective if you will, who solves mysteries of 19th century American portraits.

Joseph Badger (1708-1765), who was influenced by Robert Feke, used Feke’s basic compositional style but forsook his simplicity. Badger created a complex background panel that resulted in a richer painting but a less engrossing portrait. His landscape backgrounds may have foreshadowed nostalgic wilderness paintings of the 19th century.

The first great American-born artist was Robert Feke (~1707-~1752). Without the benefit of European training, the significant natural talent of this largely self-taught artist, enabled him to create masterful portraits. When Benjamin Franklin posed for Feke on the artist’s first visit to Philadelphia in 1746, both men were about 40 years old. Feke’s style in portraying Franklin, might be described as simple sophistication. In the tradition of formal portraiture, Feke depicted Franklin elegantly, emphasizing the man himself through the minimalist surroundings. Feke could have added numerous attributes to describe his very accomplished subject, but he did not. In the golden luster of Franklin’s wig, Feke’s painterly abilities are evident. His artistic refinement, which would remain unmatched until Copley.

The first great American-born artist was Robert Feke (~1707-~1752). Without the benefit of European training, the significant natural talent of this largely self-taught artist enabled him to create masterful portraits. When Benjamin Franklin posed for Feke on the artist’s first visit to Philadelphia in 1746, both men were about 40 years old. Feke’s style in portraying Franklin, might be described as simple sophistication. In the tradition of formal portraiture, Feke depicted Franklin elegantly, emphasizing the man himself through the minimalist surroundings. Feke could have added numerous attributes to describe his very accomplished subject as he did in the portrait of Rhode Island land-holder Simon Pease, but he did not. In the golden luster of Franklin’s wig, Feke’s painterly abilities are evident. His artistic refinement, which would remain unmatched until Copley, can be more fully seen in the clothing of the Unknown Woman.

Interesting to see a portrait of Ben Franklin at 40. He is usually seen as an older man with grey hair.

Another European presence in the New World were Swedes who settled in New Sweden, now Delaware. Swedish artist Gustavus Hesselius (1682-1755) came to the new world from Sweden in 1712 when he was 25. In his older subjects, he added a realism not often seen at the time. Around 1742, he portrayed Dr. Gustavus Adolphus Brown (1689-1762), 53, of Maryland. Brown appears to be the proper gentleman, but one who is also tired and perhaps careworn.
The artist’s son, John Hesselius (1728-1778), became a fine artist. The subject’s son, Dr. Gustavus Richard Brown (1747-1804) became one of George Washington’s physicians.
… See MoreSee Less