That [Bush] was not famous in the old world, and in the art world everywhere, was because he had not that desire for travel abroad, and for free association with the noisy and active ones of his profession, which would have given him a prominence he did not yearn for. He was content to know that the emanations of his pencil were admired and prized by those he was proud to call his friends.[1]

Joseph Henry Bush was the grandson of a German immigrant, Philip Bush, Sr. (1733-1812), who arrived in the American colonies about 1750. Four years later, he fought under Lt. Col George Washington in the Seven Years War. In 1757, Bush wed a Pennsylvania-born daughter of German immigrants, Catherine Mary Slough (1740-1810). They opened a tavern in Winchester, Virginia, where Washington and his men often congregated. “The host very often spoke with enthusiasm of this young officer’s noble bearing and attractiveness for all who came in contact with him.” In Winchester, Philip Bush was famous for evicting the Duke of Orleans (1793–1830) for imperious behavior.”[2] 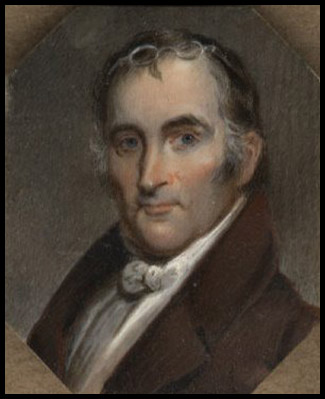 Philip and Catherine Mary Bush had nine children. The fifth was Philip Bush, Jr. (1765-1810). He was trained as a jeweler and goldsmith in Virginia, but moved to Kentucky in 1788. By 1806, he owned a 105-acre plantation three miles west of the state capitol, Frankfort. He sold his land to open the Washington Inn, named in honor of his father’s commander, but the townsfolk called it “Phil Bush’s Tavern.”[3]

Philip Bush, Jr.’s wife was Elizabeth Palmer (1766-after 1828). She was half-French on her mother’s side and born near Charleston, South Carolina. The Bushes had several children, but only two sons lived to be adults, Joseph Henry, and his brother, James Miles (1808-1875). Philip was an amateur portrait painter who created likenesses of family members and encouraged his son Joseph’s talent. But the tutelage ended. When Joseph was 13, Philip died at the age of 45, in Frankfort, Kentucky, on September 4, 1810.[4]

By managing the inn, the widow Bush was able to support herself and her children. She probably had help from her family since her younger sister, Catharine Palmer (1768-1854), had married a former United States Senator, John Adair (1757-1840), who, in ten years would be governor of Kentucky (1820-1824).

In 1815, a group of Frankfort men raised funds to send Joseph to Philadelphia to study with Thomas Sully (1783-1872). Sully was one of the most popular portrait artists of the day. Henry Clay (1777-1852) personally delivered young Bush to the City of Brotherly Love and even loaned Bush expense money. After studying with Sully for three years, Bush exhibited at the Philadelphia Academy before returning to Frankfort.[5]

In the Frankfort newspaper, the Commentator, on October 18, 1821, Bush advertised, “Gentlemen who wish to have their portraits painted can be accommodated by applying to J. H. Bush in the rooms above the Printing Office.” His biographer reported, “It was not long before he received numerous orders for portraits.” From Frankfort, Bush moved to “the Athens of the West,” Lexington, Kentucky, where he opened a studio above a bank. But he chose Louisville as his permanent summer home. “His winters were passed in New Orleans and Natchez and by request he visited the planters of Louisiana…His work was in constant demand through the South.” His fee for a bust portrait was $150.[6]

Joseph Henry Bush never married. His fellow artist and friend, Samuel Woodson Price (1828-1918), observed, “It is not positively known that he ever fell victim to the charms of the fairer sex, though there is a rumor to the contrary.” Price believed, “No artist was more wedded to his profession than Bush”, relating that Bush felt even Van Dyck and Rubens “might have been better painters if they had remained single.”[7]

Bush’s devotion to his profession, combined with his business acumen, helped his brother James, fourteen years his junior, attend Centre College in Danville, Kentucky. After graduating at the top of his class, the younger Bush moved to Lexington, Kentucky, to attend Transylvania Medical School. There, he studied under a renowned surgeon of the time, Dr. Benjamin Winslow Dudley (1785-1870), who was chairman of the departments of Surgery and Anatomy. Dudley was years ahead of his time in condemning blood-letting and demanding clean instruments. He pioneered surgical treatments for epilepsy, aneurysms, and kidney stones. James Bush became Dudley’s colleague and successor.[8]

In 1839, Transylvania Medical School’s leaders asked Dr. Bush to head the Department of Anatomy. He accepted, and at university expense, traveled to London and Paris, to learn the latest surgical techniques and to purchase books and instruments. He returned to the United States on September 21, 1839. As souvenirs for his artist brother, he probably bought the latest artistic supplies available in the two European capitols. Bush was ahead of his time in his use of aqueous mediums.[9] 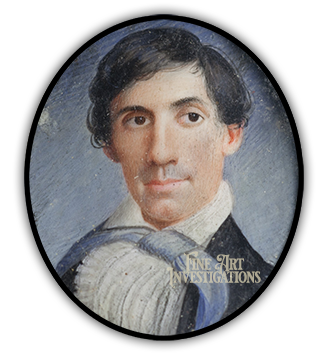 As painted portraits declined in favor of photography, Joseph adapted by painting portraits from photographs. The degree of his success is apparent in the figures recorded by the Louisville census taker on June 19, 1860. The value of his real estate was $4,000; his personal property, $20,000. But his health was failing. In 1861, he moved into his brother’s home, where he died in 1865. Not long before Bush’s death, George Peter Alexander Healy (1813-1894) painted a portrait of the distinguished man who looked every inch a consummate artist.[10]

Many fine paintings by this artist who did not yearn for fame are relatively inaccessible. Transylvania University in Lexington, Kentucky, arguably owns the greatest number, and possibly the finest of his works, for most are of his family. Also, in Lexington, the Filson Museum is the repository for several of Bush’s paintings. In Louisville, Kentucky, at the Speed Art Museum owns several. But, Joseph Henry Bush’s most famous painting hangs in the White House, the official portrait of Zachary Taylor (1786-1850) and a superb example of Bush’s skill with artistic license.

Taylor was a hero of the Mexican-American War and the 12th president of the United States. Taylor’s appearance differed from the norm. One of his soldiers described him as, “Old Rough and Ready, as he is not inaptly styled, whom you must know by-the-bye, is short, fat, and dumpy in person, with remarkably short legs.” “Although his large head and torso were mismatched with his short legs…he looked like a man born to command.” Taylor’s legs were so short, he needed help to mount his horse.[11]

Bush’s first act of artistic license was to choose a composition longer than waist length but shorter than full-length. The pose allows a viewer to see the grandeur and power of the general – and to unconsciously presume that Taylor’s legs were proportionate. Bush slimmed Taylor’s large head so much that when I looked at the paintings and photographs, I wondered if they represented the same man. After cropping, I could see the similarities. From left to right and from back to front, with paint, or with clever use of light and shadow, Bush narrowed Taylor’s skull and jaw, and not just the soft tissue; he shortened the jawbone considerably. By simply suggesting wrinkles, rather than by copying the deeply etched lines seen in Figure 16, Bush dropped years from Taylor’s face. Bush portrayed Taylor’s mouth accurately with its fuller lower lip and barely visible upper lip. In the photographs, Mathew Brady took pains to blunt the look of Taylor’s beak-like nose through lighting, pose, and possibly, through retouching. Bush opted for a more realistic look, though he softened the shape of the nostrils. 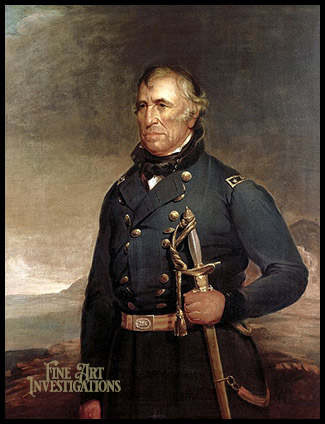 I hope sooner, rather than later, artworks by Joseph Henry Bush are more readily available to a wider public and well-deserved greater fame enhances the memory of this modest man.