In 2002, I was not yet an art detective. I was in the midst of earning advanced degrees in art history and history. But, the Bingham Portrait Project, my search for George Caleb Bingham portraits with the help of the Jackson County [Missouri] Historical Society, had brought me to the attention of a board member of an historic site, Bingham-Waggoner Estate. Fifteen years before, a Bingham portrait of a woman that had been donated to the organization. The board members and volunteers, almost exclusively women, exhibited the painting, their most valuable artifact in the main hall across from the grand staircase. They featured it in their home tours.

Shortly before my involvement, several art connoisseurs,  all of them men, stated, without explanation, and in a manner that the board and volunteers perceived as condescending and paternalistic, that the portrait was not by Bingham. Most of the women dismissed the pronouncement, but seeds of doubt grew. The board member asked if I could help resolve the concerns.

From the beginning, I knew George Caleb Bingham was not the artist. Nothing about the piece resembled Bingham — size, palette, pose, brushwork. The painting was taller and narrower than any portrait by Bingham; the palette, not as harmonious; the pose, a bit awkward; the brushwork, busier. Modeling was not as crisp or as psychologically engaging. But there was something else that was absolutely wrong that I couldn’t quite put my finger on. Finally, I figured it out. The subject’s clothing was different from any other Bingham portrait. She wore a slim skirt, a bustle, a laveuse (extra fabric draped over the hips like a washerwoman’s apron), and small straw bonnet with an upturned brim. These styles came into fashion in the 1880s: Bingham died in 1879. 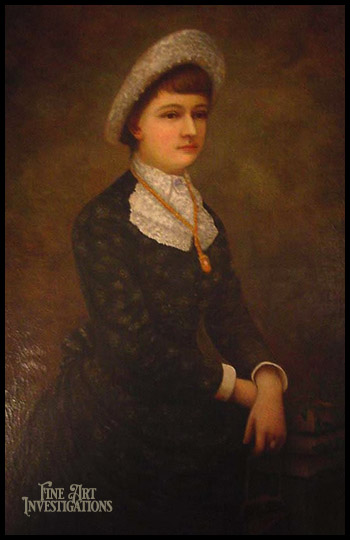 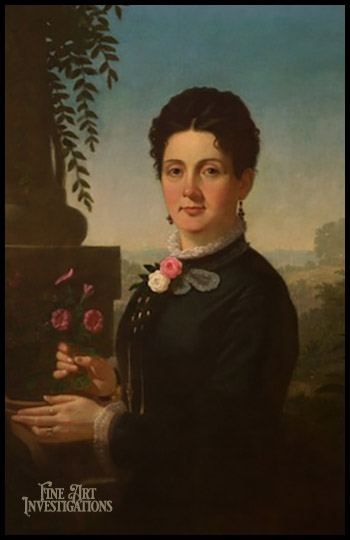 The fashion plates below show that in 1879, with swirls of fabric, designers emphasized the skirt. In 1880, the emphasis had moved up to hips through the addition of a laveuse and a bustle. The portrait subject appears to wear both a bustle and a laveuse, neither of which came into fashion until after George Caleb Bingham’s death. 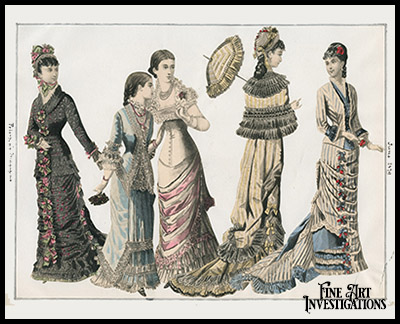 Peterson’s Magazine
January, 1879
The swirling fabric of the skirt is the fashion emphasis 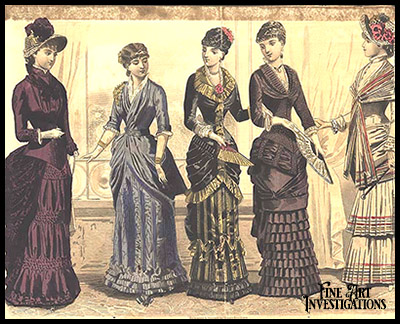 1880 Day Dresses
The addition of the laveuse places the fashion emphasis on the hips. On the model at the far right is an example of the straw hat with upturned brim. It was the latest fashion trend but was not manufactured until 1880

Despite my 100-page illustrated report detailing all the reasons why the portrait was not the work of George Caleb Bingham, the board members, honest and trustworthy people, had trouble believing that the prestigious and valuable donation had all been based on a lie.  How had this happened?

From local historians, I learned the names of the anonymous donor from 1985 and the art dealer who authenticated the painting. I learned the authenticator had been a socially prominent painter and gallery owner. He embellished the authentication with a story I had never heard. He said Bingham waited to paint the ears of his portrait subjects until he was paid. Both the donor and the art dealer were now dead. Guides at the historic home repeated the anecdote during their tour.

Through a friend of a friend, I found someone who had known the art dealer well. According to his former model, the man played the role of the artist to perfection. He was a man of sophisticated tastes. He wore a cravat. He was an extraordinary dinner guest. He had a fine sense of humor, yet time and again, he told tales of his life in eastern Europe. He was a freedom fighter who had spent time in the Gulag. From scavenged horsehair, he made brushes and painted portraits of the guards. In exchange for the portraits, the guards were to give him food or light duty. He learned not to finish a painting until the guard upheld his part of the bargain. For the rest of his life, he painted the ears in last. After his release from the forced labor camps, he escaped to the United States. He spent extravagantly, and often, he was out of money.

Still more research revealed that in the early 1980s, federal prosecutors accused the donor of altering her company’s scales and underpaying employees. The donor avoided jail-time, but owed a huge bill for tax fraud. Among the individual’s acquaintances was the artist turned art dealer. What arrangement did they have?  Where did the dealer find the portrait?  How much did he earn? It is public knowledge that he appraised the portrait at $48,000. At that time, 1985, the highest price a Bingham portrait had ever reached at auction was $16,500. Even following the rule of thumb of doubling the auction price for a private sale, the donation was over-valued. But his number gave the donor a valuable charitable deduction to reduce the tax bill.

Such lies and unethical actions are not uncommon in the art world. The ethical standards and guidelines are constantly broken. The average person does not know how to avoid art fraud. The average person does not notice the inherent conflict of interest of art dealers selling the same pieces they authenticate. For reasons I do not fully understand, I felt a commitment to right this wrong. As an art detective, am I quixotically tilting at windmills? Or am I restoring the integrity of George Caleb Bingham’s legacy – and the legacies of other artists – one portrait at a time? In the large scheme of life, this work is small, but with each correct attribution, it feels as though one small piece of the universe is back in order, and that fewer artists are spinning in their graves. Not all corrected attributions are heart-breaking. Far more often, the truth resonates with the portrait owner. More than 80% of my clients become life-long friends.